The word derives Old English ham, hom which originally referred to the back of the knee.  By the late 15th century it signified the back of the thigh – the thigh or hock of an animal – ie. he squatted down on his hams.

The diagram shows the 3 hamstring muscles, that run up the back of the thigh, the Semimembranosus, Semitendinosus, and Biceps Femoris.  Their function is knee flexion (bending the knee) and hip extension (driving the upper leg backwards as in sprinting.  The hamstrings also act as a braking system so that when we walk downhill, it is the hamstrings that slow us down.

Tight hamstrings are common and can cause problems because they form such an integral part of the posterior chain.  Tight hamstrings can pull the hips and pelvis back into a posterior pelvic tilt which then flattens the lower back.  This usually points to weakness in the abdominals, gluts and hamstrings. 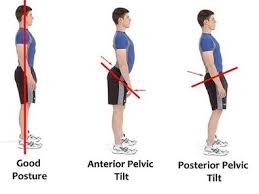 An excessive anterior or forward tilt of the pelvis is usually associated of tight hip flexors and results in a pull on the back muscles and strain upon the hamstrings which are lengthened and weakened.

However, the intricate workings of these muscles with antagonists and many synergists is a complex issue to address in yoga classes.  Whereas physiotherapists may concentrate upon the rehabiliation of a certain muscle group and use manual therapy with great expertise, yoga teachers often seem to focus upon stretching hamstrings.  Which may not always be the answer. Where we can make a difference  is by practising helpful functional movments which enable students to sense imbalances through a heightened sense of their bodies in the space in which they occupy.  Sounds high falutin but if you look at the image above and then imagine looking up and looking down with a sense of the pelvis moving forward and then back, with a sense of balanced movement over the legs – repeating this regularly and very intelligently, then gradually one might realise that the fluidity or range of movement is impaired by tight hamstrings or hip flexors (among other things, of course)

Where we can also help is by focusing upon the cause of the problem.  In this way we can highlight the function and encourage students to sense how certain unhelpful habitual movements may have led to imbalances.  I am probably stating the obvious but, for example:

Sitting for long periods and reducing movement, shortens the hamstrings.  Thus when we stand the hamstrings will feel tighter.  Good practice is to get up and move around every 40 – 50 minutes.  As yoga practitioners, we know how to easily practice cat and cow pose; downward dog or any elements of a Salute.  It is easier for us I think. 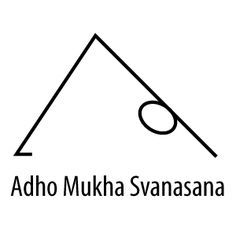 NOTE – In the image above, the pose would be all about hamstrings at the detriment of the spine, which seems very unhelpful.  Tight hamstrings pull the sitting bones down at the back causing the lumbar spine to round out. I would encourage students to bend their knees in dog pose if  hamstrings are tight:

Tight quadriceps pull the pelvis forward, thus lengthening the hamstrings.So although your hamstrings may feel tight they may actually just be long and weak. In this case, it is more useful to lengthen the quads and strengthen (not stretch) the Hamstrings.  If the focus is on stretching and stretching the Hamstrings then the Quads could tighten more to compensate.  In our practice we usually kneel (with blocks behind the knees if required) during every session and end with sitting movements that include half virasana (pictured below) which lengthens the quads. 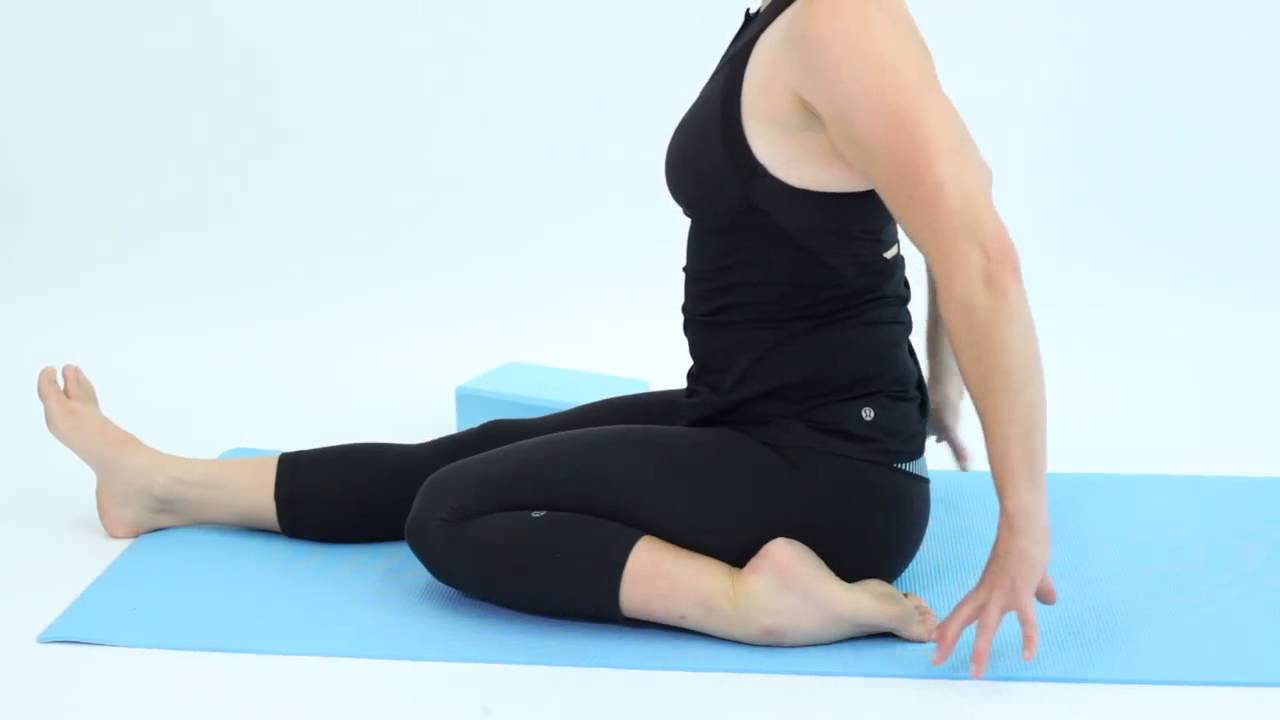 This is a very advanced pose and students would begin in Janusirasana and try rolling towards the long leg, supporting themselves on their arm/elbow and by holding the foot of the bent leg, gradually pull the foot back towards the buttocks thus lengthening the quads.  If this is too demanding, the student can concentrate upon mobilising the leg in the hip socket first.  Through this and other movements in which we lengthen just one leg, we discover how to sit comfortably on the ground without the extreme stretching that is part of paschimottanasana – the sitting forward bend with both legs extended.

NOTE:  I wouldn’t teach this pose generally, but especially to students with tight hamstrings.  I feel that it exacerbates pelvic imbalances.  I use Janusirasana in which one leg is long and the other is bent in half lotus which then reduces imbalance that may be caused by tight hamstrings on the long leg. I would not expect students to move into extreme forward bends with both legs long.

Weak abdominals. The pelvis is the muscle attachment site for both the front thigh muscles (quadriceps) and back thigh muscles (hamstrings).  The abdominals also attach to the pelvis. We have spoken a great deal this term about how the pelvis should provide a stable platform for the legs to move smoothly and efficiently beneath the pelvis Pelvis – the spiraling bowl However, performing solely upon “core exercises” such as crunches may not be as helpful as actively retraining the pelvis during movement.  Thus when we stand and investigate pelvic movement as we look up (extension) and look down (flexion), we begin to sense where our pelvis needs to “sit” in order to balance the connection between the abdominals and hamstrings.  In our rolling we strengthen the abdominals whilst putting no strain on the quads or hamstrings.  We also practise quite a lot of functional movements linked to walking.

Walking is connected to our evolutionary development and that is why practice of standing postures with both feet facing forward is so useful.  We have a deep well of experience, images, sensations that we can call upon as we practice.  A recent study showed that walking for just a few minutes ” has a significant beneficial impact upon mood, regardless of where we do it, why we do it, or what effect we expect the walk to have”.  Look at walking lifts your mood even when you don’t expect it to.  The researchers state that  “movement not only causes increased positive affect [emotional feelings] … but movement partially embodies, or in a sense reflects, positive affect.” This is what we teachers are getting at when we say “keep moving” – to which I would  add – “within your range and until it gets easier..”  This study adds to the holistic and integrated function of the whole body in human movement that we explore together in our physical yoga practice.

So, to those who worry that they do not practice regularly at home – don’t worry too much. Our approach to yoga helps us to take our yoga off the mat.  When we walk , perhaps over the coming Yuletide period, we can notice how our feet and legs carry us and how our  bones “stack up” from the ground.  We train ourselves to recall patterns – the spiralling pelvis, the feel of the outside edge of the foot providing stability and the roll of the foot and an active arch.  The pattern of movement emanating from the ground and travelling through the body , from one foot to another.  I’m getting high falutin again – it has been an busy year.  Just enjoy the movement that you have.  When you get back you may feel like moving through cat and cow poses (- moving the pelvis with awareness of the hip flexors and hamstrings) ; downward dog (lengthening the hamstrings whilst folding softly at the hips) and …-even…….Sprinters in which the hamstring of the front bent leg is strengthened and the musculature of the back leg is lengthened.  But, you know that, of course!

4 thoughts on “Hamstrings – stretch or retrain?”

This site uses Akismet to reduce spam. Learn how your comment data is processed.