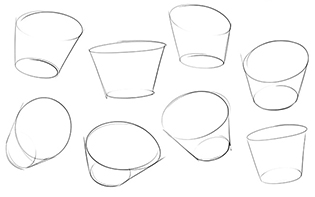 (with thanks to http://www.proko.com for the illustration)

Mabel Todd described the spiralling of the pelvis in  “The Thinking Body”. I have linked this book in a previous post –Standing and walking – free the pelvis and I have returned to it following a recent query from a student.  It is always interesting to teach a different group and to be asked to clarify elements of one’s teaching.

The query concerned the movement of the pelvis in walking.  I had an image of a moving bowl/bucket in my head as I taught and I remembered Mabel Todd’s vivid description.  She quotes a mechanical engineer who was asked to describe the act of walking in simple mechanical terms.  His response:

“.. a combination of undulatory motions in three dimensions, the result of which    described a spiral like that followed by a point on the helix of a screw-conveyor…”       Thinking Body p 200

Simple?  What??  Todd helped me out with this by drawing a picture of this spiralling movement:

.….the tipping of the pelvis from side to side and from back to front as it rotates alternately on each femoral head….”

I realized that previously using “side bending and rotating” to describe pelvic movement in walking, may not have been clear enough (see Iliopsoas – the powerhouse for another example of taking prior learning for granted!!)  If the pelvis doesn’t tip forward and backwards we would end up with crab walking which is, of course, a well-used technique to strengthen gluteals****. When  movement in the  hip-joint is restricted and the pelvis doesn’t tip back and forth, as it should, the result can be a heavy one-sided movement.

Our walking pattern relies upon stability and fluidity.  We work on good foot placement and the crouch and spring muscles that power our walking when we practice our beloved “sprinters”.  The two arches of the feet – length and width – provide sprung support as the body weight is placed upon it.  The loose-hinged ankle joint is helped by the huge calf muscle and hinged knee joints allows the legs to swing freely but not “beyond a straight line in the opposite direction” ( Thinking Body p 194).    The free moving thigh bone sitting in the hip-joint forms a crucial part of healthy and efficient movement.  The femur is the longest and strongest bone in the body and the head of the femur forms a ball and socket joint with the hip.  The acetabulum is a concave area in the pelvis into which the femoral head fits.  Mabel Todd provides a beautiful description:

“…The upper end of the thigh bones are almost globes, which are received into the deep cup-like cavities of the haunch bones. …”

The use of  haunch bones  helps us to visualize the movement of the pelvis and leg as we move up and down, forward and backwards.   Todd acknowledges the role of the ligaments that connect the pelvis to the femur but gets really excited about the articular cartilage that covers the femoral head and the acetabulum. This cartilage is kept slippery by fluid made in the synovial membrane (joint lining). As a result, the bones move against each other easily:

“…The smooth rounded head of the thigh bone, moist with glairy fluid, fits so perfectly into the smooth rounded cavity that received it, that it hold firmly by suction or atmospheric pressure…” The Thinking Body p194

“Glairy fluid”…. quite an archaic word meaning viscous and transparent, slimy and it probably dates Mabel Todd’s writing.  The Thinking Body was published in 1937 and her enthusiasm for the mechanics of the hip-joint denotes her passion for the study of movement. Read her description of the pelvis as a shock absorber balancing forces in two directions:

….the downward fall of weight from the trunk and the upward thrust from the ground as it receives the impact of the weight….

The Thinking Body Institute provides much information on Mabel’s work. She died in 1956 and is known as the founder of what is now termed ideokineses, which was developed as a mind-body modality to help injured dancers. Todd’s ideas involved using anatomically based, creative visual imagery and consciously relaxed movement to refine neuromuscular coordination.  She was not a dancer but her ideas were popular amongst dance communities in New York and Boston where she lived.

Todd’s work has influenced many and is often mentioned alongside the F.M. Alexander (a contemporary) and Moshe Feldenkreis; yet her name seems to be less well-known than both of these men whose names are synonymous with specific methods.

Mabel Todd was a pioneer in linking thought and movement.  Lulu Sweigard gave the name of ‘Ideokinesis’ to Todd’s approach.  Barbara Clark was another who furthered Mabel Todd’s ideas and Joan Skinner developed the Skinner Releasing Technique (SRT) as a result of Mabel’s work.  SRT works upon the idea that we are all born with natural ease of movement and that we lose touch with this natural ease. The technique encourages us to “let go”.  Sound familiar to those of us who enjoy a sensory approach to yoga practice.

We can celebrate Mabel’s pioneering work as we play around on the mat; on all fours and when practising walking patterns.  Her vivid prose and the detailed drawings in her book provide great clarity of thought and expression.

If interested in previous posts on pelvis, walking. somatics, intelligent movement etc – go to the home page of insideyoga.blog scroll down to the search box at the bottom of the page and type in the relevant words.  Hopefully, something will come up.  It may not be as in-depth as you require but it may be of some use.  Please ask for clarification if necessary.

No sessions next week due to half-term.  See some of you the following week.

*** re crab walking – It seems that “bear walking” is favoured by some as a more effective strengthening exercise for the gluteals!!!  Please investigate if interested.

This site uses Akismet to reduce spam. Learn how your comment data is processed.